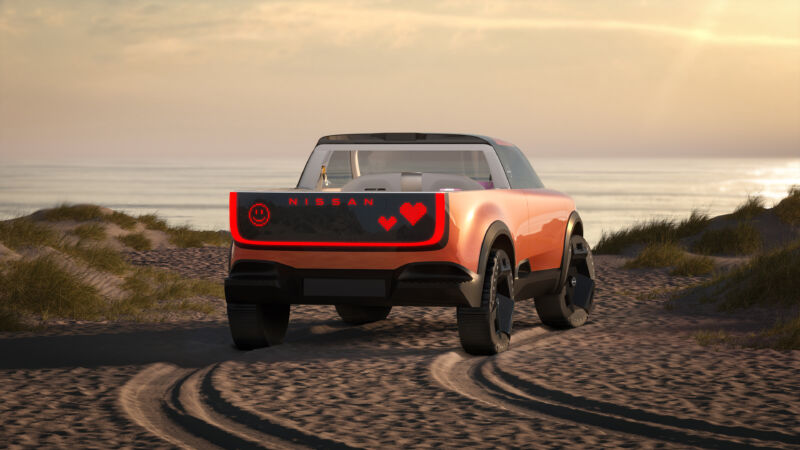 Enlarge / Yes, that’s a pickup with a tailgate that displays pixelated emoji. Nissan introduced this and three other concepts alongside its EV strategy. While they may hint at some future designs, they’re so full of the usual concept-car fare (suicide doors, swiveling seats) and absent any interesting features that they’re not worth discussing here. (credit: Nissan)

As more and more automakers have turned their attention to electric vehicles, one-time leader Nissan finds itself playing a game of catch-up. In an attempt to make up for lost time, the company announced on Monday that it will invest $17.6 billion over the next five years “to accelerate the electrification of its vehicle lineup and rate of technology innovation.”

The plan, called “Nissan Ambition 2030,” is notable for its lack of ambition.

The company says it will introduce 15 new EVs, though it gave itself a generous deadline of 2030. Nissan also said that, by the end of the decade, 50 percent of Nissan and Infiniti sales will be “electrified,” which is industry-speak for adding electric motors, not necessarily supplanting internal combustion engines. Much of Nissan’s strategy relies on series hybrids, where a range-extending gas engine will recharge a small battery. It’s a strategy that looks good on paper but has largely been abandoned by other automakers either because of mediocre sales (Chevy Volt) or looming government regulations.